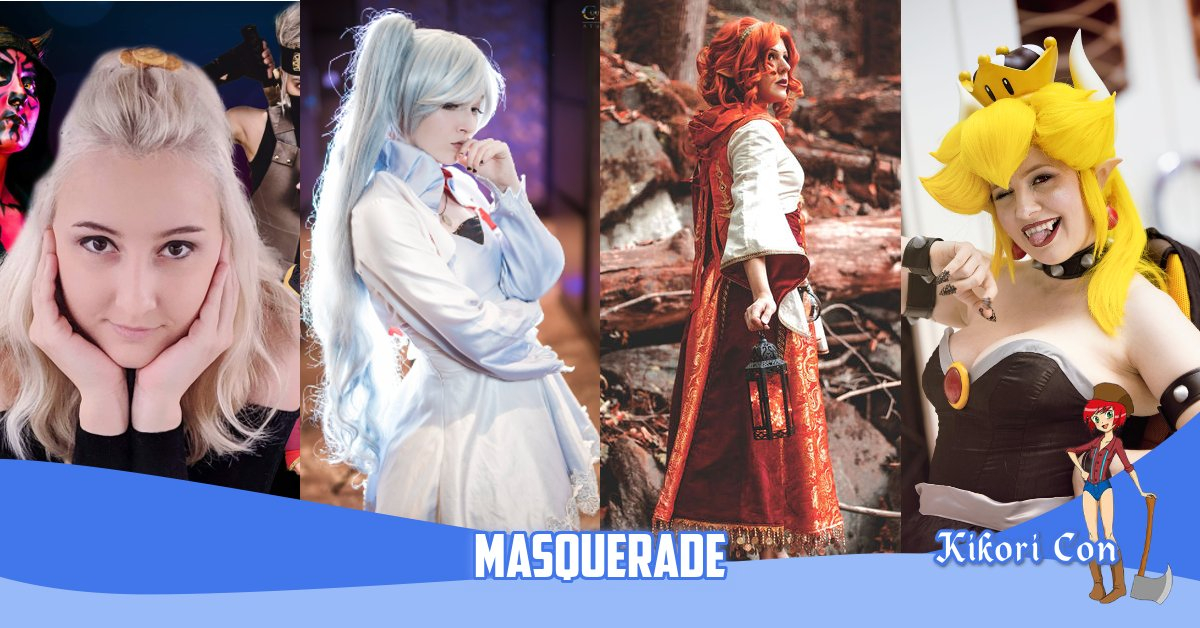 We are excited to announce the judges and emcee for this year's masquerade!

Fawnina: Fawnina is a cosplayer, Twitch Creative Partner, and writer based in the Midwest United States. After discovering cosplay as a sophomore in high school, she was instantly hooked! Despite having no prior experience with clothing fabrication, she jumped headfirst into the world of costuming, quickly teaching herself how to sew, style wigs, make props, and model her outfits. Her passion for the hobby eventually led her to earn a B.A. in Fashion Business.

Nina has participated in cosplay since attending her first convention in 2007, having made nearly one-hundred costumes over the past thirteen years. Her weekly Twitch streams focus on fostering a sense of community and offer a relaxing environment for others to join in while working on their own creative projects. Using her degree in fashion design and her prior experience in theater, she has previously acted as a craftsmanship and performance judge for convention masquerades, and has personally taken home several awards, including Best In Show and Best Skit Performance. Her focus behind everything she does is on creating a welcoming environment for those who are new to the hobby, all the while maintaining focus on what she believes to be the most important aspects of cosplay: expressing yourself, learning new skills, and striving to do your very best!

Cake Monster Cosplay: Cake Monster Cosplay is a cosplayer, YouTuber, artist, gamer, and Tik Toker. Cake started cosplaying in 2014, then realized shortly after that she loved the art and wanted to keep pursuing cosplay further. She began teaching herself how to sew and style wigs, but that wasn't enough! She later studied costuming in University where she learned more about stage presence, then took her newfound skills and applied them to masquerades where she competes regularly. Cake's goals in masquerades are to meet new friends, encourage others to follow their dreams, do her best, and most importantly put on a show for everyone to enjoy! She hopes to put a smile on everyone's face and to inspire as many people as humanly possible!

Vicious: Vicious is a cosplayer who likes making her own costumes and sobbing over fabric and wig fibers. After a decade in the hobby she’s made over two dozen costumes and worn over 50 different designs. As a Master Craftsmanship competitor, she has also won 20 craftsmanship awards, and now dedicates time as well to either judging or managing competitions. With specialties in wig styling, drafting, and sewing, she also enjoys assisting cosplayers by answering questions and making tutorials. Overall though, Vicious is just a cosplay potato enjoying her hobby to the fullest.

Ryann Kay: Ryann Kay is an Arizona costume designer, fashion designer and cosplayer. She started sewing at age 11 and started working as a theatre costume designer at the age of 17. At 21 she discovered the cosplay community, which has since changed costuming from a job to a true passion. Since then she has created over 70 unique cosplays based on anime, comics, video games, and everything in between. Recognized from her cosplays as Azula from Avatar the Last Airbender, and Astrid from How to Train Your Dragon, she is always looking for new adventures and ways to bring her cosplays to life by combining it with her other passion such as fitness, stage fighting, and acrobatic performances on a lyra hoop. Her core belief is that there is no right or wrong way to cosplay, it’s up to each individual to interpret their own character.

Billy Bolt: Billy Bolt is an Arizona cosplayer and propmaker who describes himself as a "professional nerd". Since 2009, Billy has been on the convention scene, debuting elaborate pieces from Harley Quinn's hammer to Doctor Strange's magic disks. In recent years, his work has grown into a side business, with his props even making an appearance on the Marvel red carpet. Billy always strives to brighten someone else's day, whether through comedy, paneling, cosplay, or a simple smile. He enjoys lending a helping hand to fellow cosplayers, providing crafting advice and emotional support to help create a more positive community.